This year my husband Joel and I decided to do something crazy and head out on a 2-year long road trip through Central and South America. We were super excited for this trip but we had one problem- no transportation.

We recently sold our converted Honda Element camper suv in order to get something bigger for the long trip.

With a tiny budget and not a whole lot of money, we couldn’t afford to spend our entire savings on buying a decked out $100k+ camper van so instead we decided to put our own brains and hands to work and do our own awesome DIY custom camper van conversion. 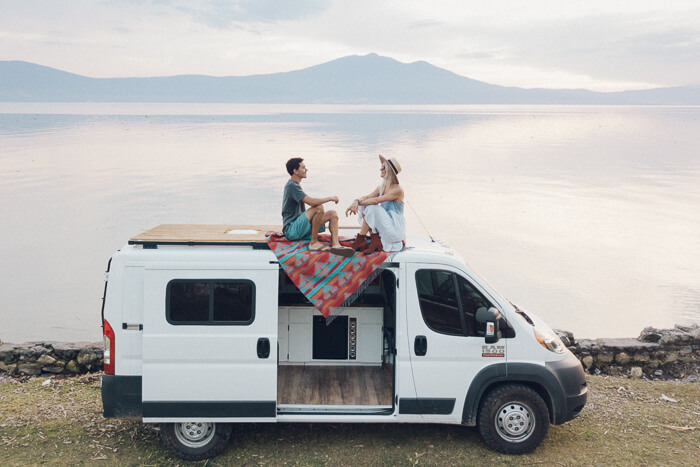 We found the perfect, slightly used Ram Promaster van for $20K and over the next 3 months converted the blank cargo van into a fully livable custom built camper for just under $3k in conversion cost.

Our guide below covers exactly how we did our DIY camper conversion for anyone inspired to join the van life movement themselves on a low-cost budget. 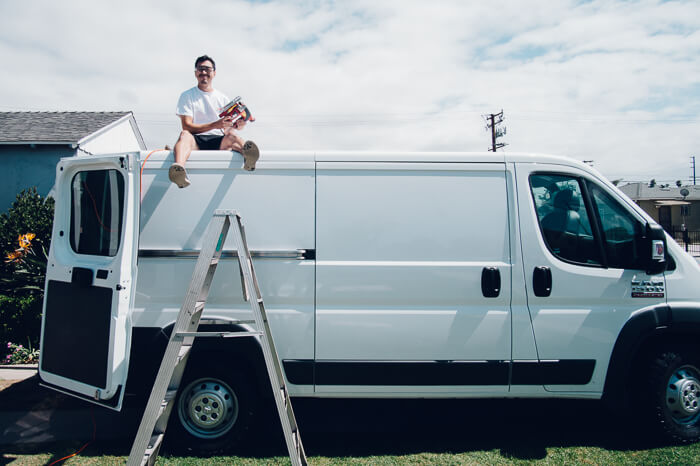 To make this Promaster camper van conversion guide easier to follow, we divided our how to guide into two parts. Part I will cover the conversion planning, layout design ideas and all of the prep work we did that’s not necessarily visible but make everything work. Part II will cover the construction of the finished product and any extras we added to make our van life travel on the road more comfortable.

When we bought the Ram Promaster van it was an empty room on wheels so the first task of our van conversion process was to come up with some campervan conversion ideas. 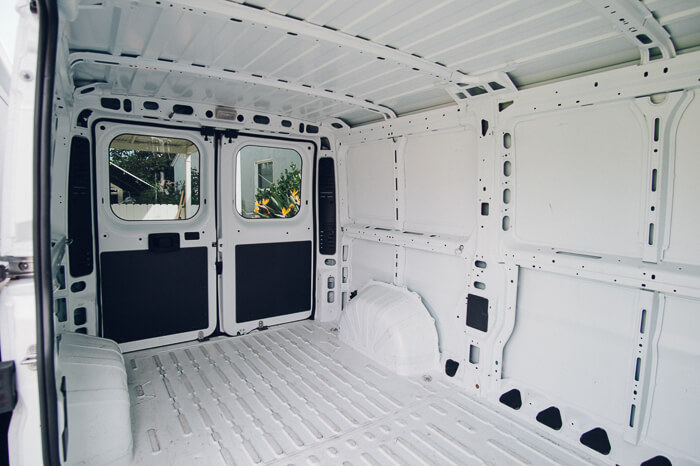 During our research, we couldn’t find any low-cost Ram Promaster conversion kits so we had to create our own customized layout and plan from scratch. After all, one of our main goals was to keep our van conversion cost as low as possible and we also liked the idea to have the freedom to modify anything in our van to make it look amazing and unique instead of using a generic kit.

Some of our DIY van conversion must have requirements were: 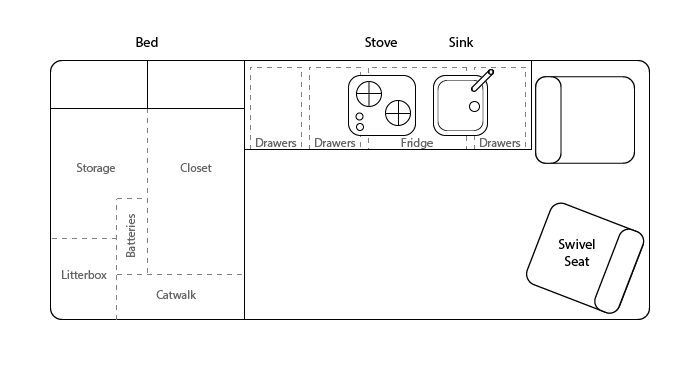 We had a basic idea that we wanted the kitchen to be in the front against the left wall and the bed in the back. Everything else we had to figure out as we built the van.

Before we started with any interior work, the first task was to cut out holes in the van for the windows and fan. This was actually one of the scariest tasks to do because if something went wrong in this step, the van would be ruined. Sounds fun, right? 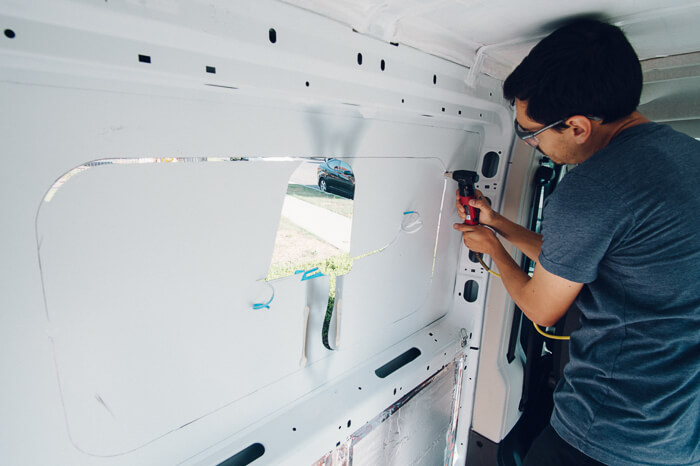 To install windows and a fan, you’ll need:

We wanted to install two sliding windows in our campervan to allow air in, add better vision and circulate air for cooking. We wanted to add one window on each side, one on the sliding door and one behind the driver’s seat. 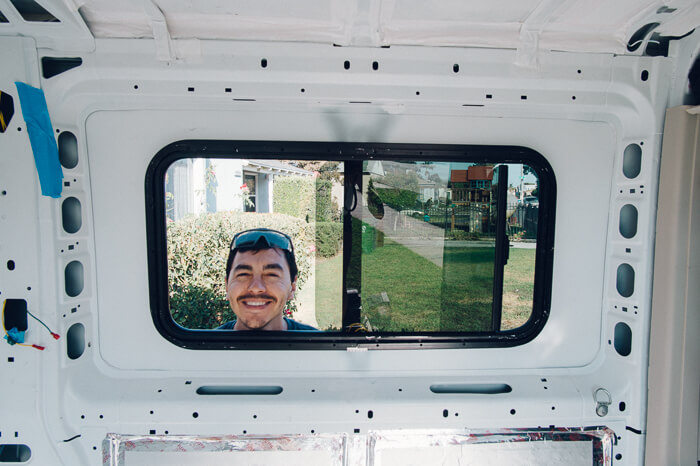 The sliding windows we chose came in medium size with screens to protect against bugs at night. We bought the windows from a local RV surplus store instead of going with the windows that are made specifically for Ram Promasters by CR Lawrence. The RV surplus store windows cost only $30 each and came with screens and trim rings compared to the others that cost around $500 a piece. 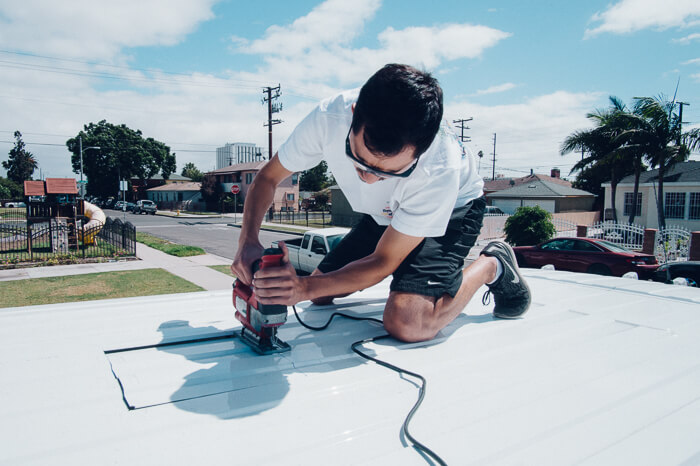 Besides cutting two holes for the windows, we also cut a hole in the roof for the fan. We decided to install the fan towards the back of the van above the bed to get better circulation as the air comes through the sliding windows in the middle of the van and out the fan in the back. 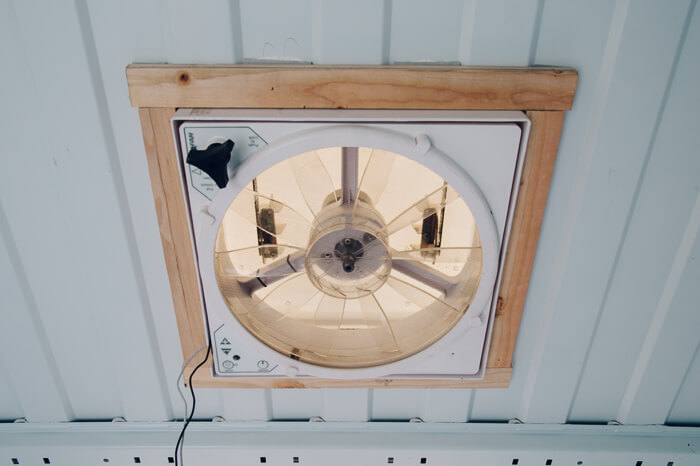 We used a MaxxAir RV roof fan with multiple speeds and a temperature sensor that can be set to automatically turn on the fan if the van gets too hot.

We used a jigsaw to cut the hole for the fan and a hole puncher powered by compressed air to cut the window holes. The hole puncher left a smoother edge and less fine cuttings which tend to dig themselves into the paint and can cause tiny rust spots to appear. 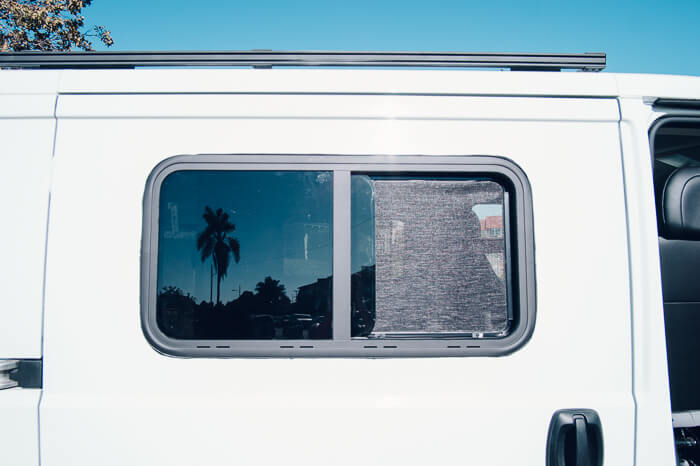 When installing the windows and fan, we touched up every cut edge with white paint so it wouldn’t rust and used this black butyl tape to seal everything off from water leaks.

Cutting all three holes right after purchasing the van was intimidating at first, but after making the first cut it didn’t feel so scary after all.

We are not electrical engineers so at first wiring seemed pretty intimidating to take on, but it turned out to be a lot simpler than we thought. 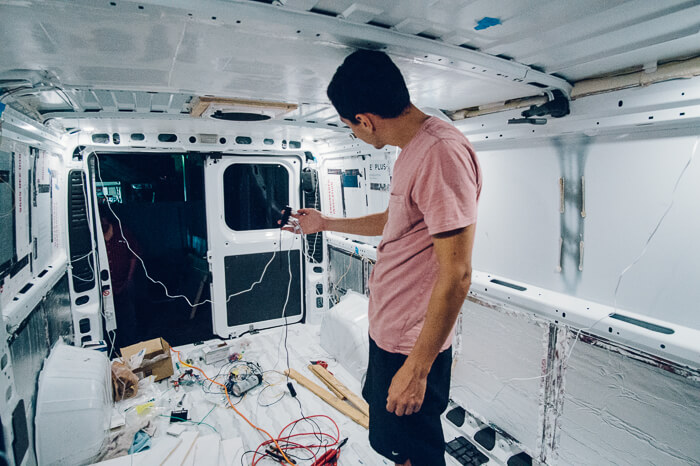 To do the wiring part of the conversion you will need:

The first step is to draw a diagram of your electrical system. 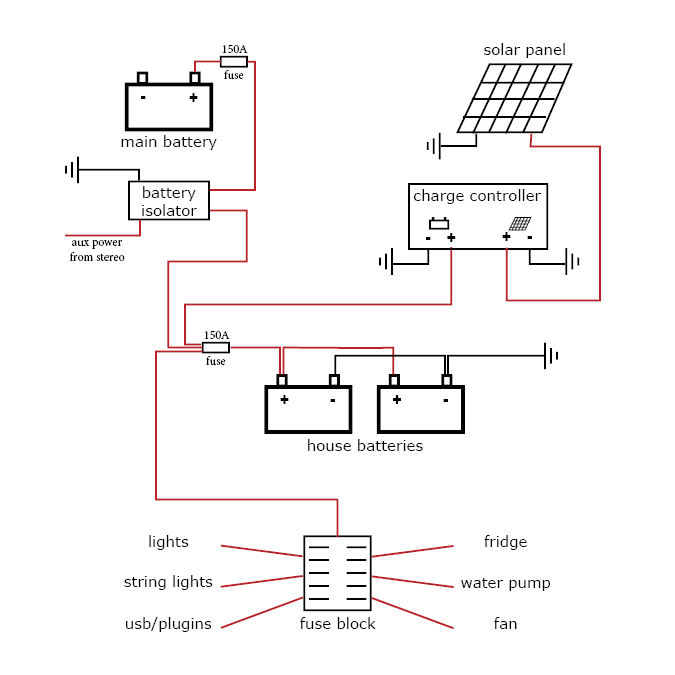 Our electrical system would include two deep-cycle Group 31 batteries (our “house” batteries) being charged by the car’s alternator while driving and a single solar panel on the roof. This system will easily power our LED lights, fridge, and water pump and have extra juice to charge our camera gear and computers.

Instead of installing an expensive pure sine wave inverter to power up our electronics, we just bought car chargers for the few things that aren’t already powered from a USB drive. 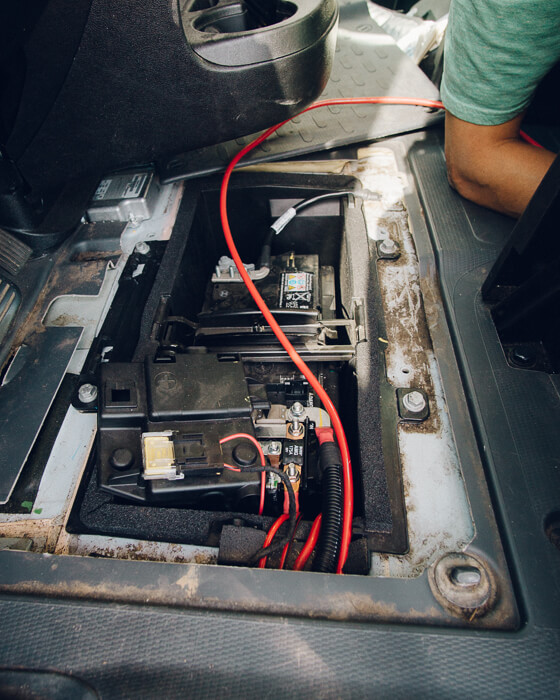 We used a battery isolator relay to charge the two house batteries from the car’s alternator while driving but disconnect them when the car is off, preventing us from discharging the main car battery and getting stranded in the middle of nowhere. This system worked great on our Honda Element conversion as long as we turned on the car for at least 15 minutes a day. 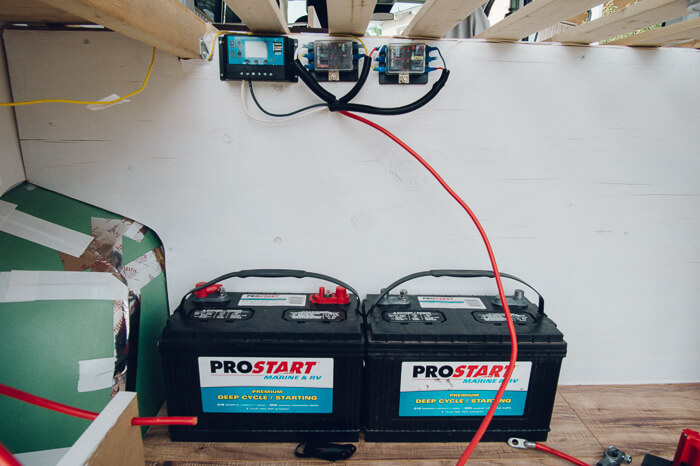 The two house batteries were placed in the rear of the van between the rear wheel wells to distribute the weight to the back a bit. This location worked out great because we could easily place the fuse blocks and solar charge controller right above it and have easy access to them in case something goes wrong. 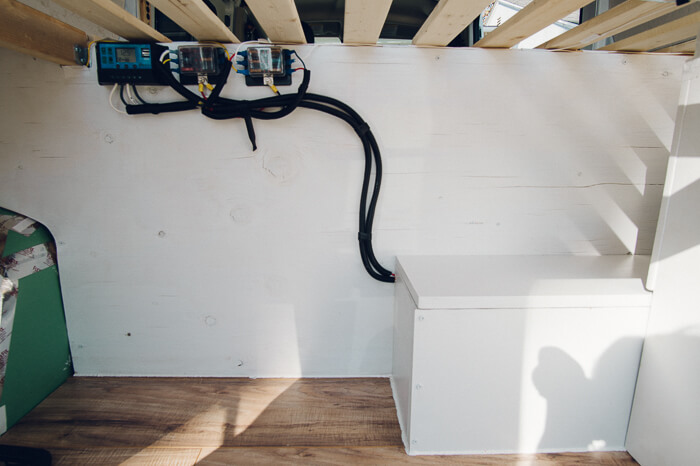 For the batteries, we used two deep-cycle group 31 batteries from Pepboys that seem to always be on sale for around $50 each. They are regular lead-acid batteries that could potentially release harmful gasses so they need to be in a sealed compartment. We created the sealed compartment using 3/4” plywood and high-density foam weatherstrip between the lid and the box, then used a ¾” hose vented to the outside right below the taillight. 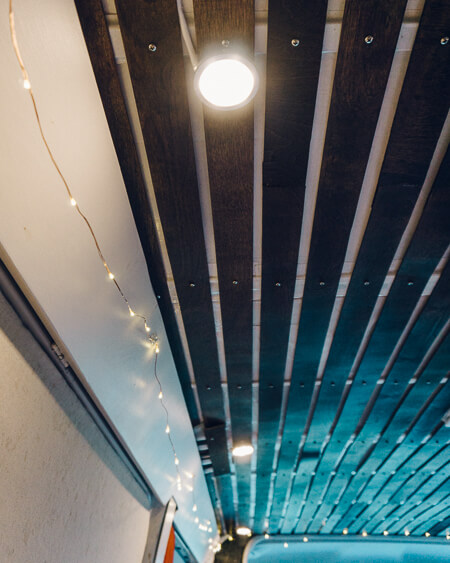 We used LED lighting all throughout because they are really efficient and don’t get hot like regular lights do. For when we need bright lights we installed five really efficient and bright LED puck lights on the ceiling and for when we want mood lighting we hung dimmable LED string lights all around the van. We used the 6th puck light under the bed in the rear storage compartment. 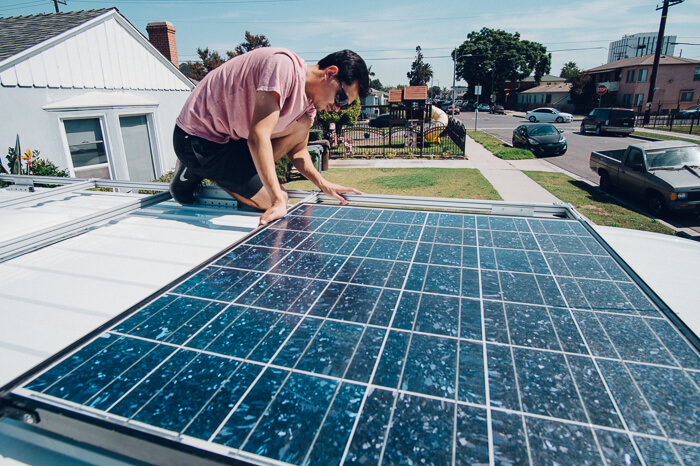 We also decided to add a solar panel on the roof of the van to help keep the batteries maintained on sunny days when we don’t do a lot of driving. Adding a solar panel is extremely easy and just needs two more components: a 12V solar panel and a $20 solar charge controller. We found a used 145-watt solar panel for practically nothing on Craigslist and installed it on the roof, then drilled a small hole on the roof to run the two wires in and sealed it with a self-leveling sealant made especially for RV and van roofs.

Before building up the interior of the Promaster van we wanted to install insulation to keep the van cooler in hot temperatures and warmer in cold temperatures.

Out of all the insulation types, we decided R-max polyiso rigid foam insulation board from Home Depot would be the best fit for our van conversion because:

The only downside to rigid foam insulation is that it takes a while to cut and fix into every panel, but considering we don’t need to seal it off completely, it still takes less time than insulating with soft fiber insulation. 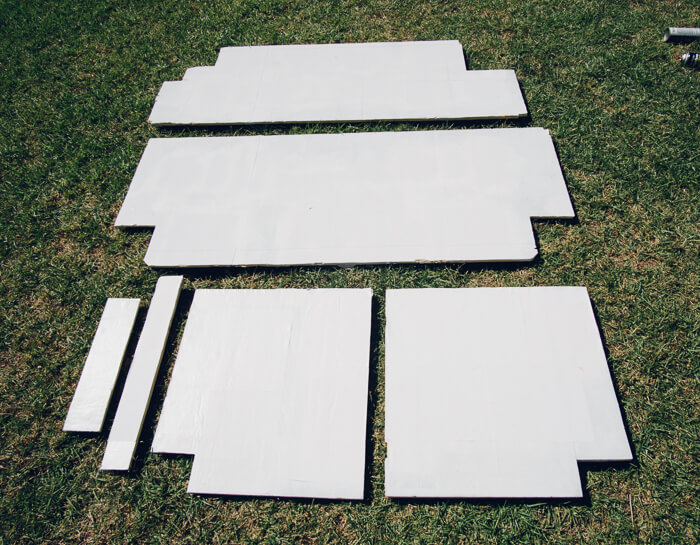 What you’ll need to do the insulation:

We then used foamboard adhesive to stick the insulation onto the walls and flexible duct tape to seal around the edges. 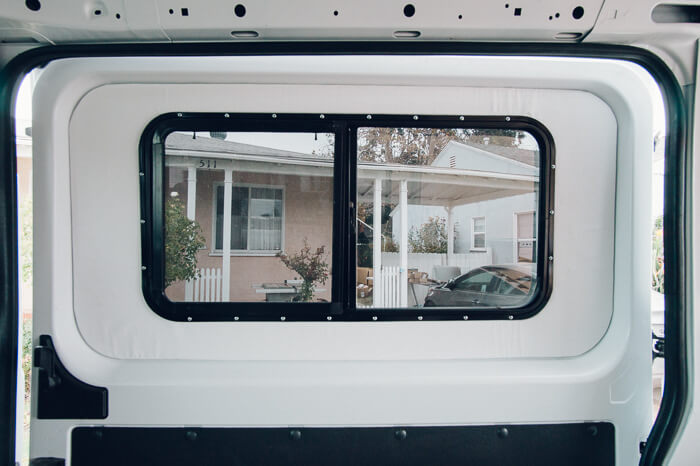 For the space around the side windows, we cut out 1/2” insulation and covered it in white cloth. This gave the windows a really nice finished look that was much easier to make than paneling.

On the ceiling, we installed 1/2“ insulation during our conversion to maximize standing room for cooking and hanging out. Since we put a large solar panel and roof rack on top of the van that would act as a constant shade we didn’t need thicker insulation in the ceiling anyway. 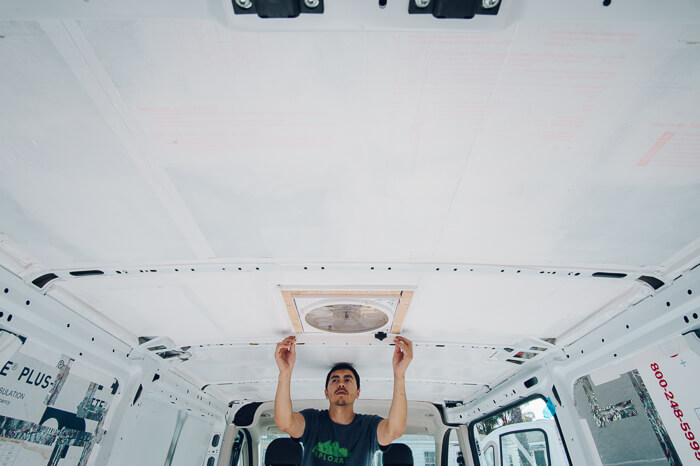 We painted all the ceiling insulation panels white because we were planning to install roof slats and we didn’t want any colors to peek through the slats.

During the conversion’s insulation step we only sealed off the large panels and didn’t bother with the smaller crevices. On our previous SUV camper conversion  we used a foam gap sealant to seal off all the small areas and ended up making a huge mess from the dripping sealant that was impossible to clean off. We found that sealing off every small area doesn’t add too much more insulation value if the big areas are sealed off properly already so we decided it was best to avoid all the hassle and mess. 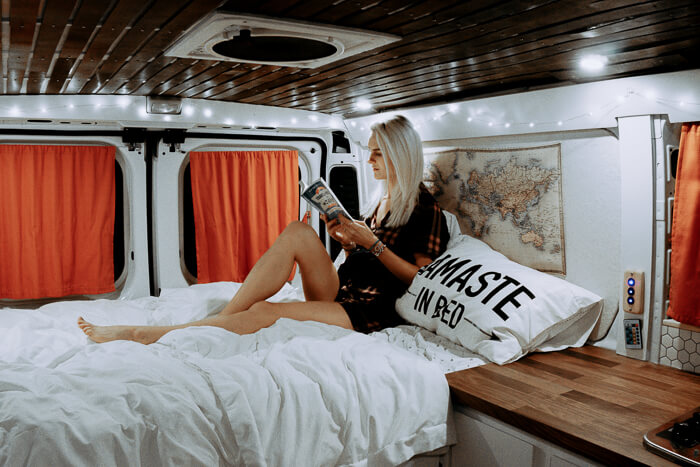 With the windows, fan, electrical, and insulation in place, we were ready to seal it all up and start working on building up the van interior and giving our Promaster conversion a finished customized look.

In Part 2 of our DIY homemade van conversion process, we will go over how we did the camper van’s interior build and all the extras that we added on to our conversion to make our van life more comfortable.

This post may contain affiliate links. Please read the disclosure for more info.

50 Van Life Tips For Living On The Road

How To Convert Your SUV Into A Camper 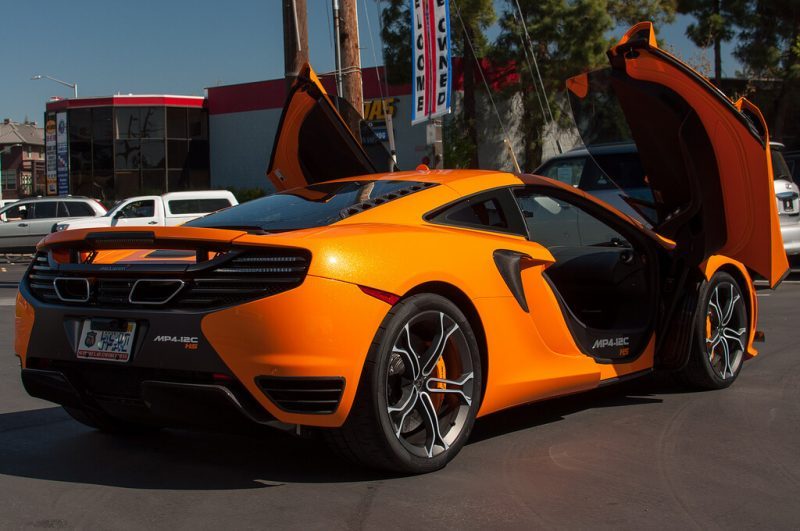 Sports Cars That Start With M [luxury And Expensiv 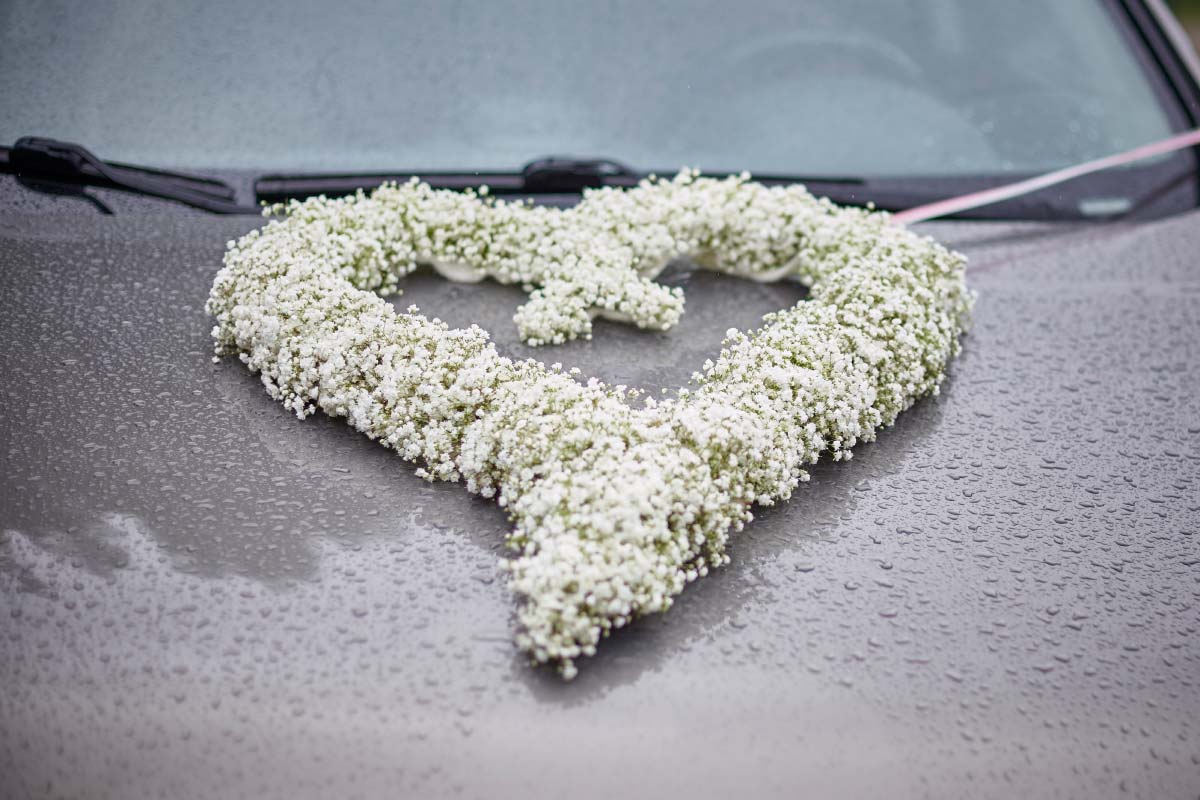 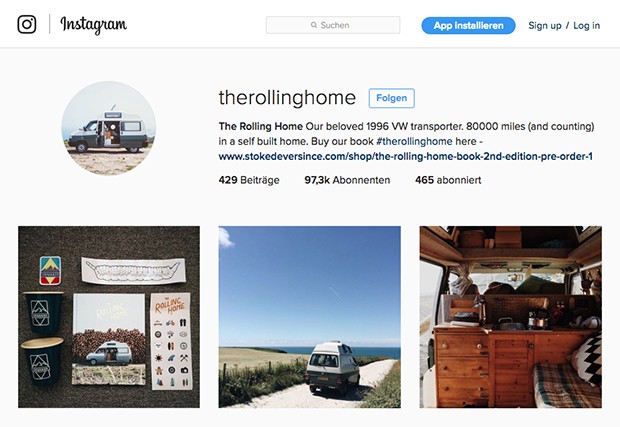 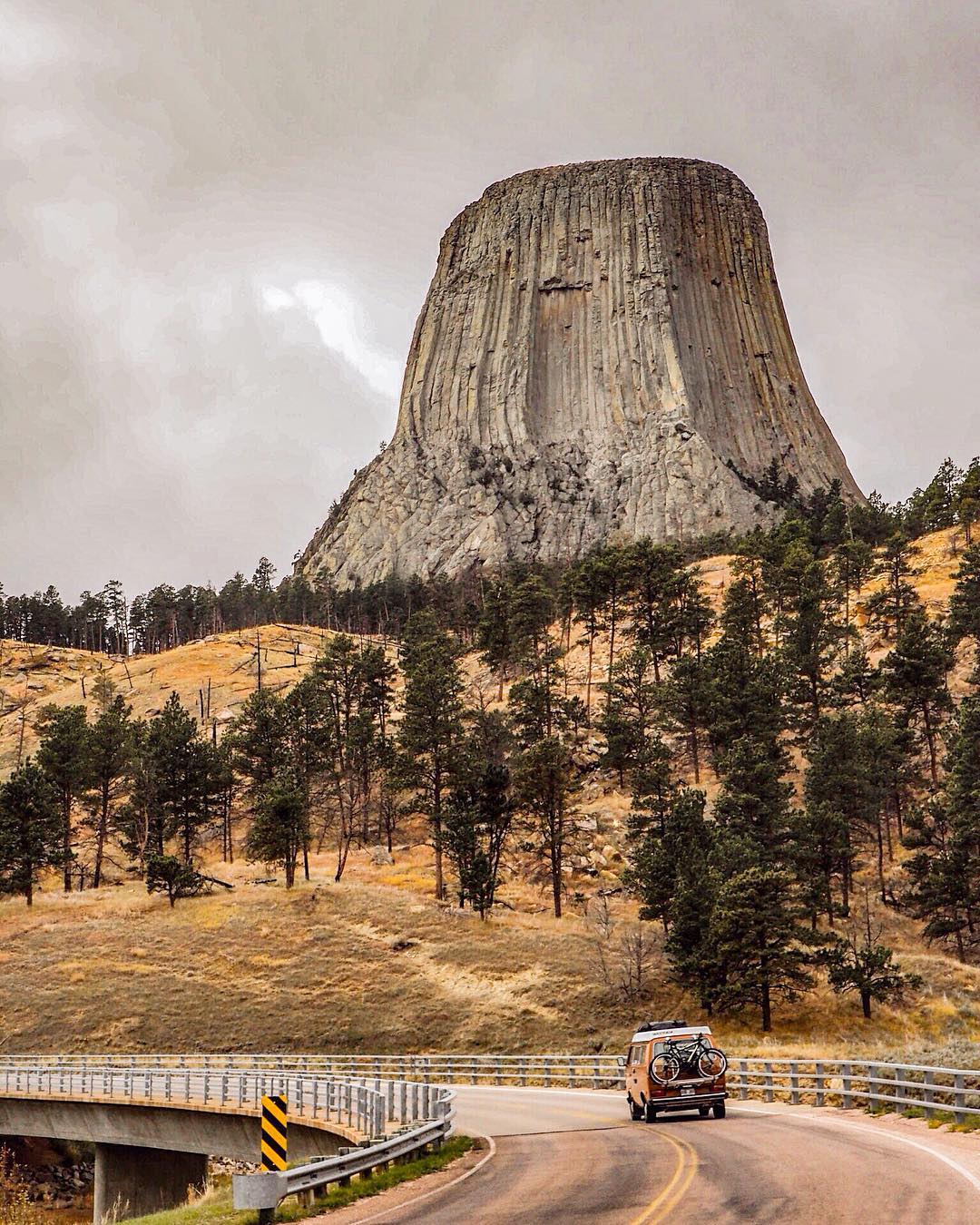 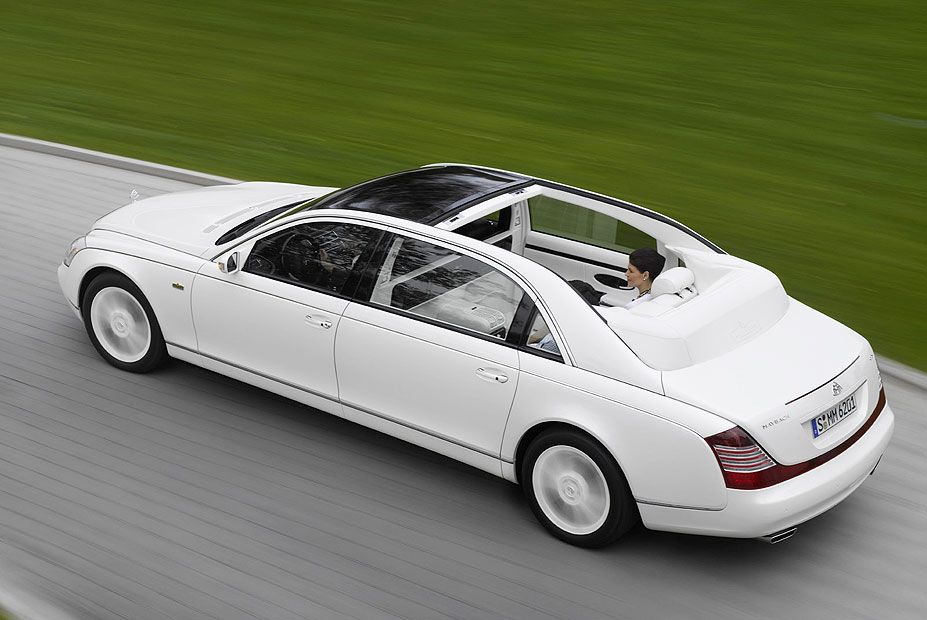 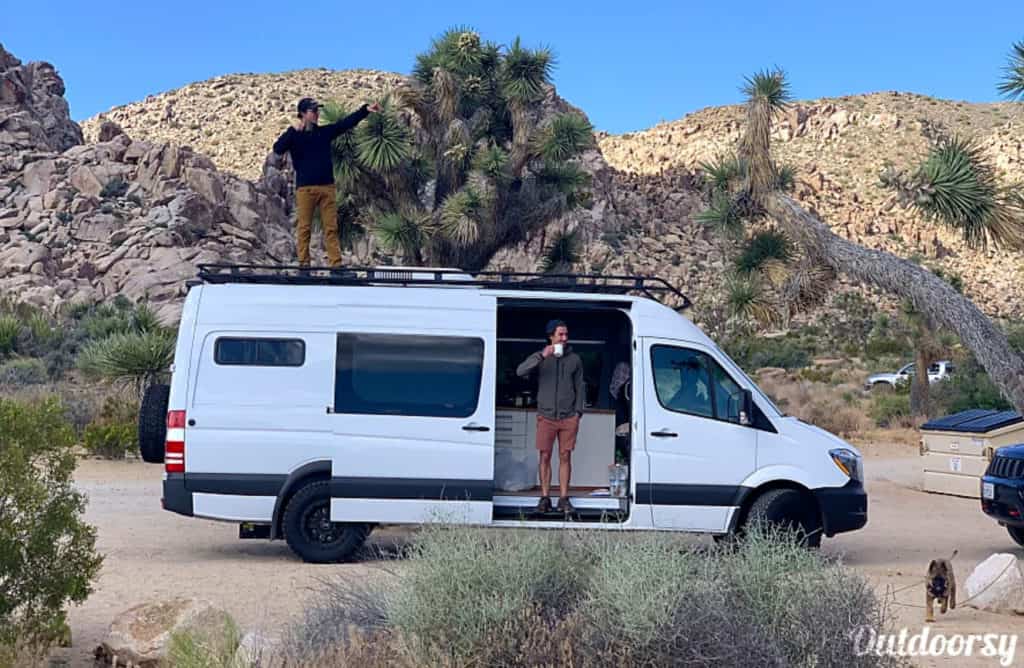 Sprinter Van Conversion: The Ultimate Guide To A M