When I was younger, I had numerous pet hates.

Roll on a few years and it’s amazing how age mellows a person and these little irks are no longer, well, irksome.

And in some cases I’ve done a complete 360° turn and the pet hate has morphed into a pet love (although this will never be said for the ear thing — I still hate that).

However, touring caravans have redeemed themselves to such an extent, I actually shed a little tear when we waved goodbye to our last one. Who’d have thought it?

Not me, that’s for sure.

But that’s genuinely what happened.

Our cool caravan Dolly — funny little box on wheels — had became such an integral part of our family life that I was gutted when we sold her a few weeks ago.

A vision of shabby chic — probably more shabby than chic — and the catalyst for so many amazing adventures.

She offered the most comfortable bed and shelter from torrential rain (I’m thinking Glastonbury last year when the deluge was so bad it bent and snapped the metal poles of our awning).

Whilst other festival revellers struggled with damp clothes and steaming socks, we were safe in the knowledge that our spare clothes were bone dry and we had a comfy warm bed to snuggle up in, when the music — and mud — became a little too much. Resplendent in Cath Kidston; it had been noted — on many occasions — that our little caravan looked like CK had thrown up in her but I don’t want to dwell on that ;)

She was comfy and cosy and a million miles away from the boring old beige caravans that you usually see crawling along the roads.

Although she didn’t start off like that. Oh no.

A Caravan Makeover With a Difference

When we first bought her she was your typical offering. Beige. Brown wood. Nasty upholstery.

A pretty standard touring caravan.  It’s not often I’ll put ugly pictures on my blog but — in this instance — I thought it was important to illustrate just what we were dealing with when we first clapped eyes on her. I think before and after caravan renovations are much more interesting than just the ‘afters’.

Ack.The above pictures hurt my eyes to be honest! She was a vision in brown.

Needless to say, a few cans of paint and some chintzy wallpaper rectified all that.

Although I searched on the internet for caravan makeover photos, it was before the days of Pinterest, so trying to find out how to update a caravan interior was pretty tricky.

Nevertheless, with some moderate DIY knowledge — and a lot of good intent — I set to and turned Dolly into what we see here today. When we bought her, my boy and I were a little unit; just the two of us. We never — in our wildest dreams — expected that there would be two more little bodies joining us on our travels!

Needless to say, we’ve managed for the last couple of years but as the twins are now growing boys — and will soon be out of their travel pods — we needed more space than Dolly’s 2 berth capacity could offer.

So we’ve waved her off with her new family and bought a new van.

Another vision in brown. And actually — if at all possible — much (much) worse than Dolly was when we first bought her.

I’m SO looking forward to sharing the new caravan’s makeover on the blog.

Fingers crossed, over the course of the next year, she’ll be turned from ugly duckling to beautiful swan.

A new home-on-wheels in the making — and many, many more adventures to come :) Before and After Images of our First Caravan Makeover!

It’s been a few year’s since I wrote this original post and, since then, we’ve updated another caravan — Dolly 2 — you can see the second caravan makeover blog here.

I’ve also created a totally separate caravan makeover post, on how to update a caravan interior. You can go and read the first part here, which outlines how I wallpapered and painted the interior of both vans. 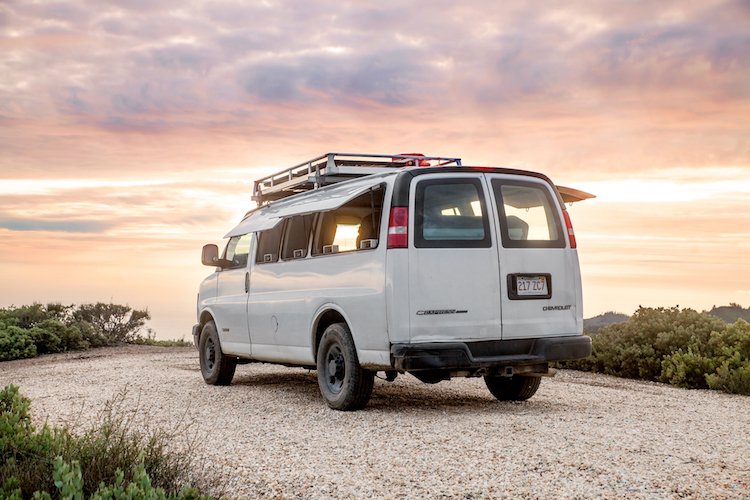